It’s bachelor party tiiiiiime! The wedding’s booked, the future looks better than you ever imagined it could because the man or woman or non-binary person of your dreams has agreed to marry you. Everything’s good to go.

Now it’s time for the machismo-dripping ritual of the bachelor party.

Actually, if you’re the groom, this piece probably isn’t for you. Put your best man, or one of the groomsmen, in front of the screen. Go ahead, we’ll wait.

OK, so you know the drill. Along with all the dancing and the drinking and the laughing, there’s a uniform that goes with this night. The bachelor party shirt is a tradition, like a class ring, or the fun version of corporate branding.

You guys are a gang. A team. An unstoppable collection of individuals, all of whom are here to celebrate the rite of passage that is the bachelor party of one of your number. Gangs have uniforms. Teams have uniforms.

Bachelor parties have T-shirts, that unify the group and, apart from anything else, will be there decades down the line to spark the memory of both the wedding and the last joyful, stupid hurrah of single-dudeness.

You need to get this right.

Don’t panic, bro. We’ve got you covered. We’ve collected the 10 best bachelor party shirts that are out there in the wild – and the best thing is, they’re all available online. Get the sizes of every member of the bachelor party, and the shirts will take care of themselves – one less thing for you to think about.

In a hurry? Here’s our top pick.

Beer Me, I'm Getting Married 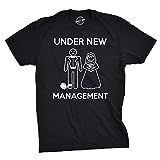 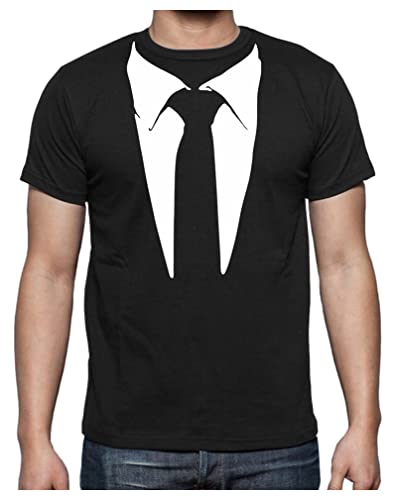 There’s a tradition that says bachelor party shirts have to make jokes – usually about the surrendering of control, or the dumbassery of the decision to get married, or the need for more alcohol because what the hell is the groom thinking?

And sure, we’ve got plenty of those in this collection, because yes they’re lame, but they’re also traditional, dammit!

But let’s start off with a soft option. A pleasant, inoffensive, no-words-needed design with a suit and tie tuxedo print. Made of 100% cotton, it’s both comfortable and, as it’s machine washable, it’s prepared for any amount of bachelor party carnage and spillage.

But unlike some shirts that go to the crude side as a part of the festival of machismo, this one’s entirely acceptable anywhere. You can use it as a subtle side-eye to the dress-up culture of the wedding itself, or as an embracing of that same culture.

A whole bachelor party in tux shirts might look like the male strippers have arrived in the club (whether you embrace that idea or not is up to you, don’t @ us!), but at least it’s cooler than many bachelor party shirts by virtue of what it doesn’t say – there’s no implication of an impending disaster or mistake here.

It’s just a shirt that says you’re ready to party, uptown or downtown is all the same to you.

Hot Tip: This might be the shirt to wear if you embrace the madness that is inviting your father-in-law to your bachelor party.

Beer Me, I'm Getting Married 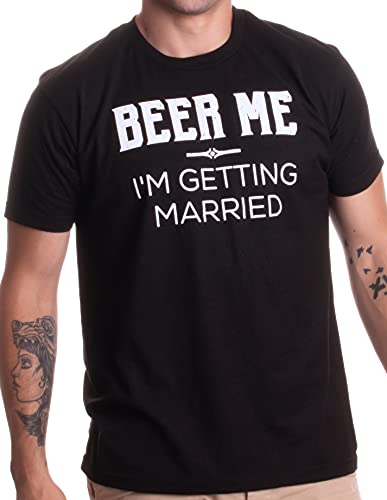 That whole notion of needing Dutch courage to go through with the wedding is centuries old – it was a joke cracked by Shakespeare, and it’s been used by several other literary geniuses since, including the likes of PG Wodehouse.

The “Beer Me, I’m Getting Married” shirt is a quality 100% cotton, machine washable shirt, with a good-hearted message that’s perfect for the bachelor party.

What’s the bachelor party for, after all, if not Dutch courage, celebration of comradeship and the ritual last hurrah before the groom is handed over to their spouse, their nights of peer-group debauchery either exorcised, or at the very least, celebrated.

A neat feature of this shirt is that it’s available in different colors, with slightly tweaked messaging, so the groom can go with standard black and the “Beer Me, I’m Getting Married” message, while every other member of the party can back him up with a gray version, with the rather less committed “Beer Me, I Like Beer,” for a less confusing bachelor party all round. 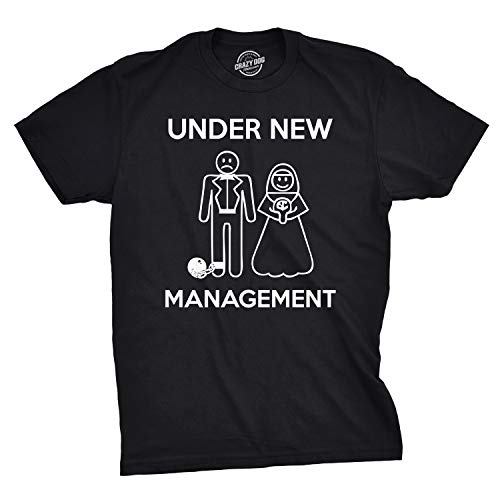 You’re going to draw eyes and comments with this shirt, so you’d better get used to it.

On the one hand, you could argue that it’s never going to be the groom’s spouse’s favorite shirt in the world, as it depicts the groom as miserable, while the bride smiles – the idea of manipulation and happiness in the groom’s misery is hardly likely to age well.

It is of course also appropriate only for heterosexual (or het-presenting bisexual) couples, so this is not one for gay bachelors (at least, not unless there’s drag involved).

But in the age-old tradition of jokes about tamed or chained masculinity after marriage, this is in the category of a wink to old-fashioned misogyny, while acknowledging that now the groom has more to think about than simple self-gratification.

This is a fitted shirt, so you might want to go one size up to be properly bachelor party comfortable. It’s also made from ringspun cotton, so the message on the front will be the least comfortable thing about it. 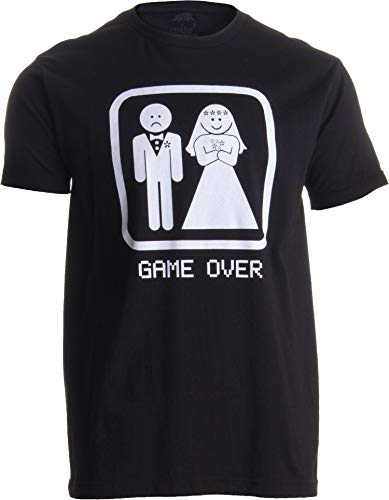 In a similar vein to the “Under New Management” shirt, there’s a chance the joke on this shirt might not go down too well with the groom’s new spouse in the 21st century, carrying as it does the implication that the groom would still be “playing games” were it not for the seeming “restriction” of being married.

On the other hand, plenty of spouses will have a “Damn straight” reaction, so it’s less universally likely to land you in hot water.

Like most of the shirts on our list, this is made of 100% cotton for comfort and washability. Unlike some that are fitted though – you might want to go up a size for those – this is pre-shrunk, so you can order in exactly the size your bachelors tell you they are.

If they’re hopelessly lying to you, that’s their bad – you should make them wear the shirt on the night anyhow!

If the shirt gets a good reaction from the groom’s new spouse, there’s certainly more of a chance of this shirt seeing the light of day after the wedding, too – though as it gets further and further from the day of the wedding, it’s probably one you’ll use for gardening, groceries and household chores, rather than for the fun or the point of the message. 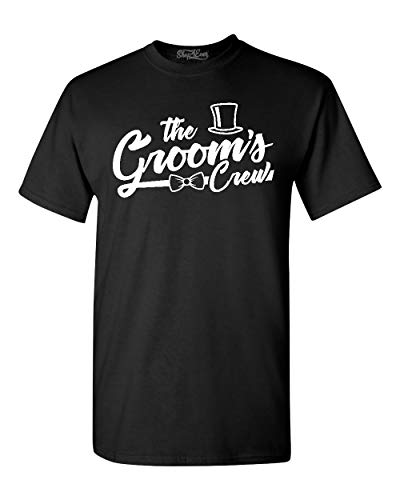 Another shirt that steps away from dubious humor and goes with the idea of style and panache – at least as far as a bachelor party shirt can do so – the Groom and Groom’s Crew keeps things neutral while announcing the event of the upcoming wedding and the bachelor party beforehand.

Unlike most of the shirts on our list, this is a cotton blend, rather than 100% cotton, and it also comes with a drawstring closure.

Available in a range of colors and a modern fit (so you can order in true sizes), it’s also slightly more complicated to wash than many on our list. You have to remember to turn it inside out before washing, or the legend on the front might well flake and come loose, making the shirt old before its time. 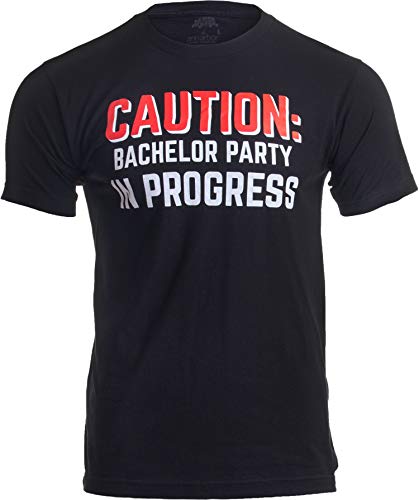 They say forewarned is fore-armed, and in these 100% cotton shirts, you’ll certainly give the staff at any bar you enter fair warning. No, you’re not just any gang of loud dudes. Yes, you’re a bachelor party. Let the chaos commence!

In fairness, the shirts are among the more tame and generally friendly, while seeming to contain an automatic apology for any stupid stuff that goes down.

They’re also as good a marker of the event as any other, and won’t stop you wearing them again in the future, any more than band shirts from a particular tour are only wearable during that particular tour.

The Caution shirt is slightly tapered so as with some others, if you’re not sure about a tapered fit – especially one that will shrink slightly in the wash – go a size up to be safe.

All in all, it’s a comfortable shirt that doesn’t contain any problematic imagery and serves as a great “event shirt” with plenty of re-wear value. 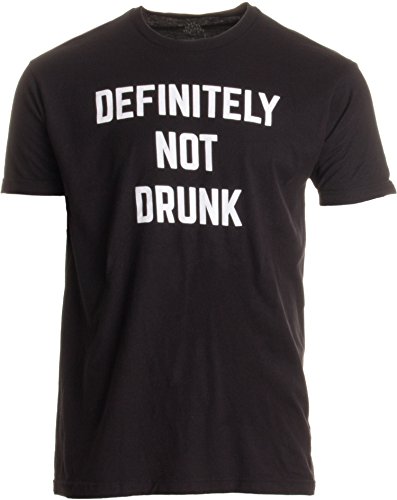 If one of the best things about the Caution: Bachelor Party In Progress shirt was its undeniable honesty, this one has what might be thought of as Sliding Scale Honesty. It may well be accurate – or at least, accuracy-adjacent – at the start of the night.

The job of the best man and the other members of the groom’s crew on the night of the bachelor party is to make it as fundamentally inaccurate as possible.

For an extra drinking game on the night, maybe take forfeit-bets on whether any of the party can get served another round of drinks, therefore proving that they can carry off the “not drunk” boast on the shirt.

We wouldn’t advise you to try and convince anyone of the sobriety of the party once you get home, though. Nothing good comes of that.

This is another 100% cotton, machine washable shirt with that modern tapered fit, so as with the others, go up a size if you think you’d be more comfortable that way.

Okay, we’re not going to lie – we want to be part of any bachelor party where the outfit includes this My Little Pony-style unicorn shirt.

As a vibe, it’s so entirely contrary to the traditional bachelor attitude of drink and stupid things. That makes it fun, light-hearted, and weirdly less threatening to anyone who’s not a part of the group.

It’s available in a range of colors, and – because you knew there had to be a downside - different colors come in different cotton/poly mixes with different washing instructions, so it’s one you’re going to need to read the label of once your bachelor party unicorn shenanigans are over and done with.

Joyously, especially if you’re a gang of low-maintenance bachelors who are secure in whatever your sexuality or gender identity might be, this is a shirt that can also come with matching banner, bachelor party apron, checklist, and decorations, so if you want to, you can unicorn the living daylights out of your bachelor party with this shirt.

Sorry, Ladies, This Guy’s Getting Married 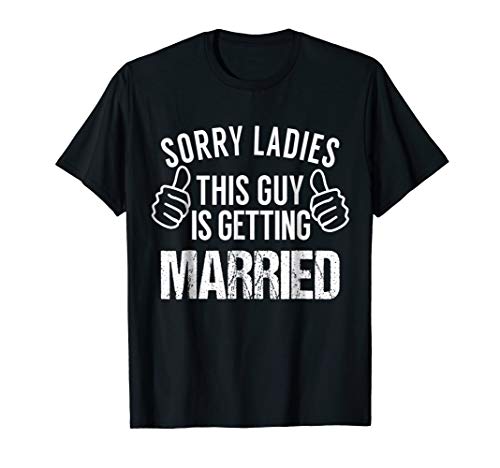 In almost an entire turnaround from the unicorn shirt, this one has an ironic wink in its eye.

A slightly clumsy take on the “Who has two thumbs and is getting married?” trope, this shirt nevertheless radiates self-aware self-mockery, and equally lowers the heat of potential trouble that often comes with a large group of partying guys.

Weirdly, while this shirt follows the unicorn in its color variants, cotton mixes and washing instructions – and is also available as the cornerstone of a whole bachelor party pack, there seems to be no option to tweak the wording for the bachelors supporting the groom, so unless more than one of them are getting married, this is a groom-only shirt. 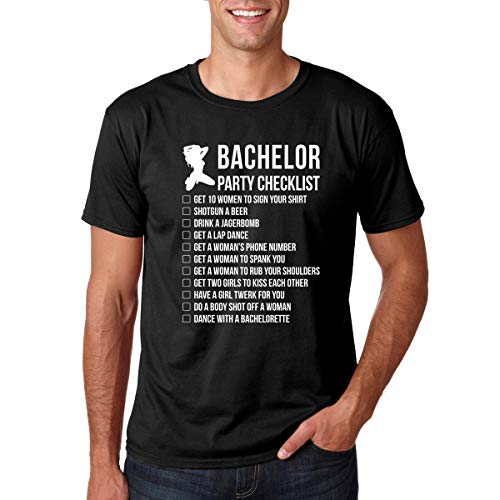 And finally – oh, finally – the antithesis of the non-threatening shirts, this Bachelor Party Checklist shirt dives straight into all the bad behavior traditionally associated with bachelor parties, including getting a lapdance, getting a woman to spank you, and doing a body shot off an obliging woman.

You’ll have to gauge both your bachelors and the mood of your groom’s future spouse before committing to his list, which also includes getting a woman to twerk for you, and persuading two women into performative kissing.

100% cotton and pre-shrunk, the one thing you should avoid with this shirt is ironing, as that might well lift the legend off the front in hot, sticky clumps.

Also, you should probably avoid the 21st century if you’re aiming to get a lot of re-wear value out of this shirt.